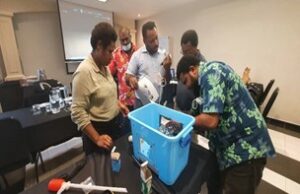 Port Moresby, Papua New Guinea, 2022 – The Global Green Growth Institute (GGGI) in partnership with the Climate Change and Development Authority (CCDA) and the Central Provincial Administration (CPA), will be conducting community level trainings in five selected rural communities of Central Province under its project titled “Capacity Building to Strengthen Sustainable Implementation of Renewable Energy Technologies for Rural Energy Access”. The initiative is part of a 4-year regional project currently under implementation in the Melanesian countries: Fiji, Vanuatu, Solomon Islands and Papua New Guinea. The project is funded by the Republic of Korea through the Korea International Corporation Agency (KOICA) in partnership with GGGI and the Pacific Islands Development Forum (PIDF).

The project’s main objective is to strengthen informed and inclusive decision-making by resource owners and local government officials for integration of Green Economy (GE) and Renewable Energy (RE) into Local Level Planning and to Strengthen Implementation of Renewable energy (RE) infrastructure for Rural Electrification, taking into account gender and inclusive development. 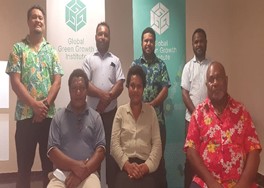 Eight experienced national trainers have undergone 2 weeks of training of trainers (ToT) workshop, out of which, four (4) have been selected and will soon be mobilizing to the selected remote rural communities in Central Province to deliver the training.

The project aims to train a total of 3000 people in all 4 countries, that is 750 people per country, while also achieving 40% women and 20% vulnerable groups participation.

The project was piloted in the Rigo district and the upcoming main trainings will cover five villages in that district. The training starts off in Keapara Village in early August, before moving to Alukuni, Karawa, Imuagoro, and Kalo villages completing training in all sites by the second week of September 2022. All the training modules will also be launched later this year and made publicly available on the online knowledge management platform developed under this project.

We use cookies on our website to give you the most relevant experience by remembering your preferences and repeat visits. By clicking “Accept All”, you consent to the use of ALL the cookies. However, you may visit "Cookie Settings" to provide a controlled consent.
Cookie SettingsAccept AllReject All
Manage consent

This website uses cookies to improve your experience while you navigate through the website. Out of these, the cookies that are categorized as necessary are stored on your browser as they are essential for the working of basic functionalities of the website. We also use third-party cookies that help us analyze and understand how you use this website. These cookies will be stored in your browser only with your consent. You also have the option to opt-out of these cookies. But opting out of some of these cookies may affect your browsing experience.
Necessary Always Enabled
Necessary cookies are absolutely essential for the website to function properly. These cookies ensure basic functionalities and security features of the website, anonymously.
Functional
Functional cookies help to perform certain functionalities like sharing the content of the website on social media platforms, collect feedbacks, and other third-party features.
Performance
Performance cookies are used to understand and analyze the key performance indexes of the website which helps in delivering a better user experience for the visitors.
Analytics
Analytical cookies are used to understand how visitors interact with the website. These cookies help provide information on metrics the number of visitors, bounce rate, traffic source, etc.
Advertisement
Advertisement cookies are used to provide visitors with relevant ads and marketing campaigns. These cookies track visitors across websites and collect information to provide customized ads.
Others
Other uncategorized cookies are those that are being analyzed and have not been classified into a category as yet.
SAVE & ACCEPT